The A112 Abarth is a myth in the history of motor racing. The first version of this evolution of the standard A112 was equipped with the classic 982cc engine with 58 horsepower, which became 70 with the 1050cc version, introduced in 1975. The A112 Abarth enjoyed a long career, with several evolutions. The fame of the car came from the rallies, with a successful single-brand store organized by the Fiat Group between 1977 and 1984, from which champions such as Attilio Bettega, Fabrizio Tabaton, Vittorio Caneva, Michele Cinotto and Franco Cunico emerged. 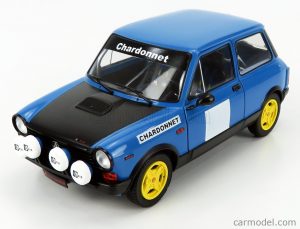 Be the first to review “Solido Autobianchi A112 1:18 Scale” Cancel reply