The 2020 GT500 was unveiled at the January 2019 North American International Auto Show in Detroit. It is powered by a hand-built 5.2-liter “Predator” aluminum-alloy V8 engine with a 2.65-liter roots-type supercharger. The Shelby GT500 produces 760 hp (567 kW; 771 PS) and 625 lb⋅ft (847 N⋅m) of torque. However, it will not arrive to the European market due to the V8 5.2 liter motor not able to comply with European road regulations, therefore it will only focus on North America and Middle Eastern countries. 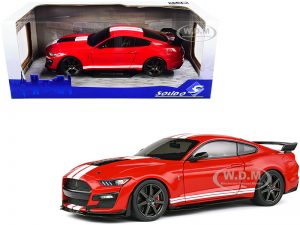