The Dino 246 GT, development of the 206 GT, was presented at the 1969 Geneva Motor Show. The car took up the layout of the 206, but the 2.4-liter V6 engine was renewed and improved. The Dino 246 was a great commercial success and the car remained in production until 1974, even with a version with a removable roof, christened the 246 GTS. The Dino, which also had a sporting career participating in the 1972 24 Hours of Le Mans, is remembered as one of the most beautiful and elegant cars of the late sixties and early seventies. 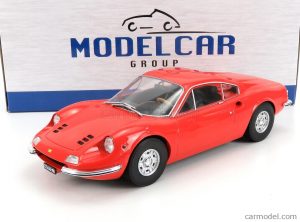